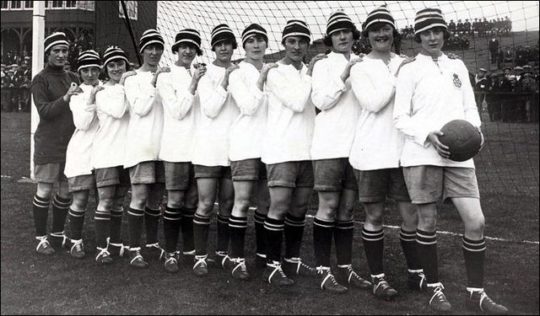 When corporate culture needs to shift, sometimes you need an example to follow.

I have never been a fan of soccer, but its history of including and empowering women has very few parallels across the traditionally male team sports. Basketball, baseball, ice hockey and American football all have traditions of male dominance, but it is female soccer that has long captured the imagination of the American public.

In actual fact, the first women’s teams appeared in England at much the same time as the men’s teams in the 1890’s, but fast forward a century and it was in the U.S. that women’s soccer truly started to take off. Stadiums are packed to the rafters, girls dream of following their idols and the women’s game is now as professional as the men’s.

That popularity is (belatedly) being transported to the rest of the world, with over a million spectators due to visit the World Cup games in France in person.

Now, here is what I find strange….

I have always thought of soccer as an aggressive sport which is marred by petulant behaviour and populated by self-indulgent man-children. I’ll admit, this is a view that is coloured by the fact that I do not know a great deal about the sport, but from an external perspective I can see the same sort of abundance of toxic “masculinity” that prevails in many a board room.

Except soccer has genuinely smashed the gender bias ceiling, and many a business should learn a great deal from its example.

When I am sourcing for a senior role, the thought of “over-selling” a female applicant’s abilities shouldn’t have to cross my mind, but I still find myself making extra arguments to make up for their gender. I really shouldn’t have to, but the biases are very real. If women can break through, thrive, and even change the face of football, why can’t there be a female-led revolution in the board rooms and offices of the corporate world?

I know that much is being done to address the gender balance, but the see-saw is so lop-sided that only immense events can move the scales. When something as big as the Women’s World Cup briefly enters the world’s collective psyche, you must make the most of the chance to break the stale corporate mindsets.

Women are just as good as men at work. Fact.

Some women are better, some women are worse, but all women deserve equal opportunity to succeed. Women soccer players were given this opportunity, and they are out there, right now, exhibiting the same breath-taking skills as their male counterparts.

I just hope that the board rooms of the world take note of how to seize this opportunity. There is no more inspiring example than the current events in France.