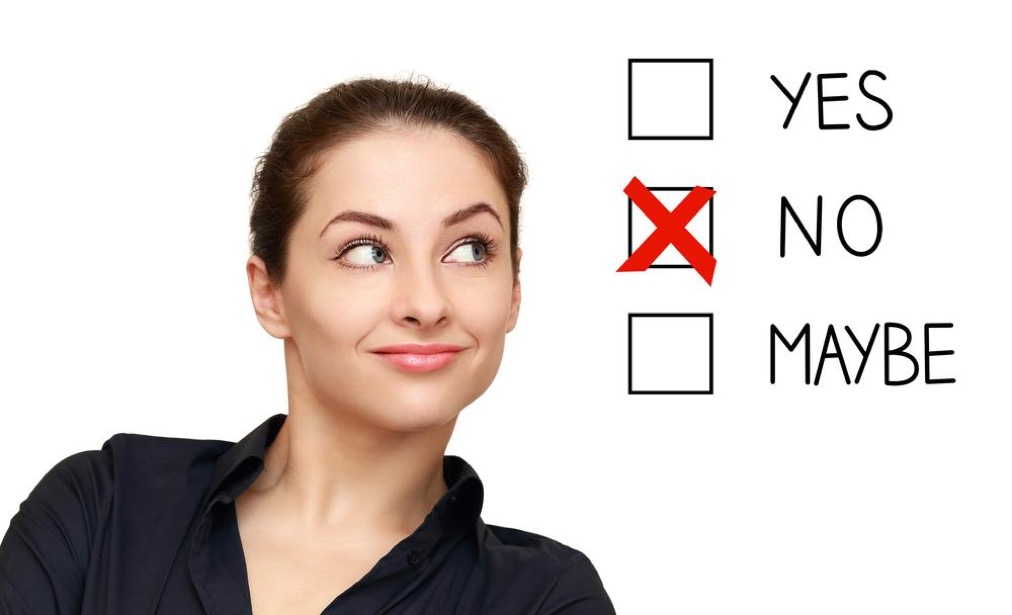 “No” is one of the smallest words in the English language, but it seems to me that we don’t say it anywhere near often enough.

Life is complicated enough without being certain of where you stand, and people seem to concoct all manner of versions of “maybe / possibly / not yet” in order to avoid calling a spade a spade. “No” allows people to move on, it gives us certainty, one less grey area in the puzzle of life.

When a recruitment client says “maybe” to potentially hiring a candidate, my heart sinks. They rarely stipulate what is required to turn a maybe into a yes, and it merely means that they want to keep a candidate “warm” until they understand that there isn’t a more suitable person out there. They think that a “no” would be interpreted negatively from a candidate’s point of view, but actually the opposite is true. If the candidate were to understand the reasons for the hesitation, a “no” would allow them to mentally close that door and move on.

The candidate is either the right fit for the company of they are not. There will always be “better” options out there, but the hiring company needs to make a decision at that moment in time, with all the information that they have at their disposal. That is a recruitment perspective, there are many others….

No is often seen as the destroyer of hope. Actually, I would see it somewhat differently. The absence of a “no” gives renewed fuel to faint hopes, hopes that may have no grounding in reality and that can see a whole life spent chasing the impossible. The true “no” does indeed give a finality to certain hopes, but it provides a clean slate, a fertile ground for new hopes to rise up – hopes that may result in a “yes.”

There is the boyfriend who spends years devoted to his girl who he hopes to “maybe” marry one day. Maybe there is a manager who is great at his job and hopes that his competence will “possibly” ensure a Director’s role in a few years. There is the dream that is tantalisingly within reach – maybe, just one more year and it might happen….

Be fair to yourself and others – when it seems like you should be saying no, why aren’t you? If there isn’t a good reason, are you letting your delusions start to take over? I am the most positive of people, but even I would draw the line here.

When the probabilities are low, false hope can be worse than no hope. It is fuelled by the “maybe” merchants of this world, who see the word as a passport to an easier life. Saying no takes courage, it often requires an explanation, but sometimes it is simply the right thing to do.

More often than we realize, no can be a hugely positive word. It shouldn’t be used anywhere near as frequently as yes, but should replace “maybe” wherever possible.

If you definitely can’t say yes, why aren’t you saying no?