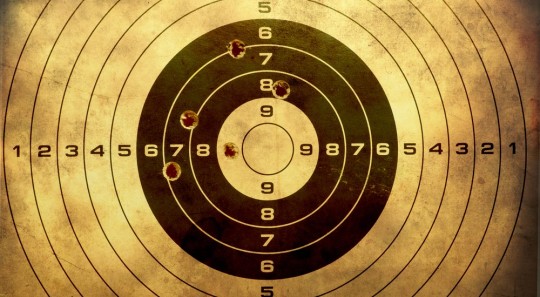 When we have a target, we tend to adjust our behaviour to move towards it. Humans are a compliant bunch in general, but I often wonder that we are missing out on a whole load of potential if we merely adapt our behaviour in accordance with a pre-defined target rather than behaving in the very “best” way possible and seeing what comes of it.

This might sound a little complicated but bear with me.

Let me start with an example from the school playground.

I have been a governor at my local primary school for the past few years and whilst reviewing our behaviour policy last term we looked at how the school had been managing playground behaviour. Earlier on in the year teachers were asked to report on incidents that they had witnessed. That was their target. Naturally attention focussed on the small groups of “lively” children (who probably enjoyed the notoriety), and the more passive of children went relatively un-noticed. This naturally created a negative aura about the playground, and suddenly it was about the amount of bad behaviour rather than the natural mix between bad and good.

We set a one-sided target, behaviours were altered, and the bigger picture was lost.

On noticing this, the headteacher decided to change things. Rather than focus on the negatives, she asked the teachers to focus on reporting both the positive and negative behaviours. In a way, this is still a target, but it has driven an entirely different vibe around the break time. The more challenging children are deprived of the oxygen of notoriety, and the good kids are encouraged to be even better.

In both cases, we set our teachers targets of what to look for, but I wonder if there is a third way? What if we set them no firm targets at all, apart from maximising the “wellbeing” of every child in any way possible? Part of me thinks that this would give them the maximum amount of flexibility to be as adaptable as possible in every conceivable situation. One minute they could be reprimanding a bully and the next minute they could be praising an act of kindness, without any overriding agenda and with an utterly individual approach. Giving them the freedom to respond to situations without a “target” in mind gives them the ability to make their own decisions depending on the subtleties of the situation.

I think that business could learn a lot from this approach.

The world of management feels comforted when there are targets for every conceivable activity. If you make sixty sales calls, you will get five meetings, and you should get a sale from one of the meetings. That is your target. One sale every week. If, on the other hand, the salesperson was simply tasked with ensuring that their behaviour made their (past, present and future) customers as happy as possible, how many sales do you think that they would make in the long run? More than one a week, I can assure you.

The problem with not setting firm targets and simply tasking people with behaving in the right way is that it is all a bit fluffy for the micro-managers of this world. You have to trust people to do the right thing and act in the best interests of those around them as well as themselves. Very few companies are ready to take this “do what you think is right” approach with their employees, just as the curriculum restricts schools from letting teachers “do what they think is right” in terms of nurturing the young hearts and minds around them.

It is a tricky problem. Sometimes giving up control and letting behaviours drive results can be an incredibly powerful phenomenon. It won’t bear fruit every time, but I would bet that in the long run, it would be more effective than saying “there is a target, go and hit it.”