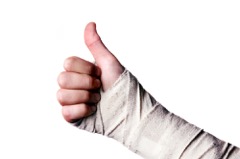 You may be an intellectual heavyweight, you may be the life and soul of the office, or you might have the influencing powers of a diplomat…. everything counts for nought unless you have the ability to handle hardship.

I am not just talking about putting up with difficult times, I am suggesting that the true “leaders” (of the office and in life) actually welcome them. Through their past experiences, they understand that difficulties make them tougher, and they have an opportunity to learn more about themselves. Once they have pushed themselves through the limits, the next time will be all the easier. New limits come along, and that is how they grow.

They actively thrive on pain – they know that it is temporary if they keep on moving through it. It only keeps “hurting” if they stop.

There are a multitude of “reality TV” programmes, which attempt to demonstrate this. The latest in the UK is “Special Forces: Ultimate Hell Week.” It contains a group of super-fit civilians being put through their paces by six of the toughest special forces from around the world. They are pushed to their physical limits, but, actually, the most interesting battle is inside their heads.

Not many of us mere mortals can relate to the physical side, but we can all relate to the “nope, no more, I can’t take it, I give up” feeling. For me, cycling a mountain stage of the Tour de France was tough, but it could not compare to the mental anguish that I have felt at certain points in my career. Mental toughness is so much harder to attain than the physical type, but until you welcome the challenges, you will never truly be sure that you will make it out the other side.

The similarity is that you more you “train” your brain to get you through, the easier it will be the next time. There will be a ready-made neural pathway for “ok, been here before, it’s going to get rough, but you did it once, you can do it again.” No one situation is the same, but the moment your brain sees the “warning” signs, it is already getting into survival mode and knows that it has every chance of emerging stronger on the other side.

Thus, the best leaders emerge during the tough times – they ride the waves of uncertainty and pass their belief onto their teams. There is nothing more inspiring than sprinting at full pelt towards a brick wall and smashing through it. That is my mental picture when I think about some of these inspirational people. Each of their team members saw them smash the wall, and each of them starts to believe that little bit more that it is possible. Maybe in the future they will take on the mantle of the fearless leader. If someone else can do it, why can’t they?

Your muscles will waste away if you sit still all your life. Your mind will atrophy if you don’t challenge it with seemingly impossible tasks. It is a cliché, but very little is impossible. It is only impossible if your mind runs away from the pain.